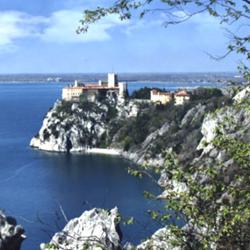 The cliffs between Duino Castle and Sistiana Bay were a wide but almost unknown group of crags where few climbers used to climb apart from few locals.

After the creation of the Duino Cliffs Nature Reserve and its wilderness zone, the access to the part of the Reserve between the Rilke Path and the seashore was forbidden (along the first part of the path some signposts with “no climbing” are evident). Except at Sistiana, that lies at the opposite extreme of the Nature Reserve, climbing is nowadays permitted for individuals or small groups, only at the historic crags named Piastrone and Sister Moor, no so far from Duino Castle. In 2015 new regulations for the Reserve is being approved with more severe rules!!

Piastrone is a wide and characteristic slab facing the sea. The rock of this slab is stinging limestone, ideal for adherence climbing. Routes are between 40 and 60 meters where the grade is easy but the distance between anchors marks the real difficulty.

At the adjacent Sister Moon crag, overhanging routes and hard climbing are the distinctive sign.

On both crags, take particular care of the state of the bolts and belays: in spite of they are stainless steel and quite new, many of them are oxidized due to the salinity of the sea that seems to damage the anchors very quick in this crag (it’s the only case in this area).

In both crags, due to the heat, climbing in summer is totally unadvisable and possibly it will be forbidden due to the new regulations to preserve the habitat for pilgrim hawk.