Suggestions for your next climbing trips: Renato Bernard tells us about his experience on the Adriatic coast.

In the end, he proposes a slide show of the rock walls of Trieste, Osp, Omis, Paklenica, Hvar... Just enough to make us want to go there. 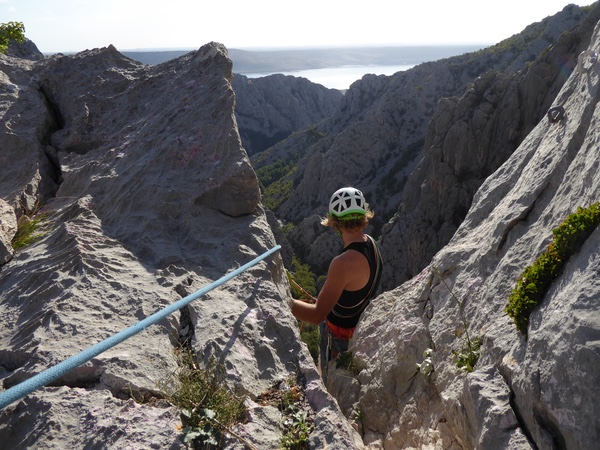 As every year,  in late summer, at the end of my season of mountaineering guide, I get a long vacation, a two months climbing trip, before undertaking the winter season of ski instructor, and ic climbing.

The choice of the place is always really hard, because there are too many places that I'd like to visit, and, on the other hand, many views in my family: both  Etienne and Petra have their opinions...

Last springtime, I won and they followed me in a long, full-immersion trip in the sandstone cracks of Utah (Moab) and of Nevada (Las Vegas). This time, instead, Etienne won. He, remembering a dream island (Hvar) seen on some Croatian climbing web site, seemed to have a clear idea where we should go.

Thus we left for the Eastern Coast of the Adriatic sea, with few short stops in Istria and Slovenia, having as with final destination the Dalmazia.

We departed from the Dolomites, and after a few hours we got to Trieste, where we stayed for two days, climbing on the amazing limestone of the "Costiera" and in the "Napoleonica" crag, two milestones of the Triestine climbing.

Then we spent two days in the nearby "Ospo", passing through the picturesque Slovenian small town  Ljubljana; the first day we chose to climb in the overlying crag of Osp, which proved to be truly outstanding (whereas almost all climbers go only in the nearby Misja Pec), and the first day we climbed one of the amazing multipitches routes on the big wall. 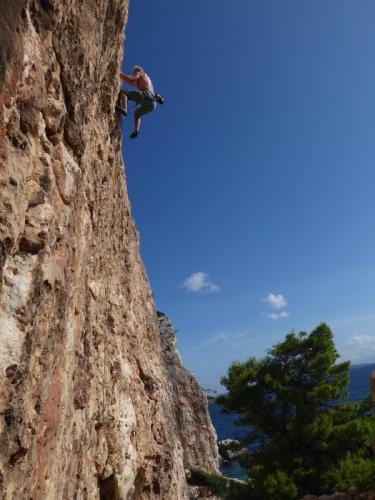 Then, back on the road again, toward Paklenica, where two amazing multi-pitches routes are waiting for us, on the rock walls of  Anica Kuk and Debeli Kuk. Once there, we bumped into De Laurentis and Caporale, two mountain guides that Haven't seen since they were attending the course to become guides.

Paklenica has proven to be superb, not only for its famous multi-pitches, but even for the excellent quality of its single pitches.

Then we took a ferry to the island of Hvar, two hours out of Spalato, and visit such an idyllic spot. Our destination is Cliffbase, a private crag. You must pay for a ticket to climb there, but it's worth it. The rock wall overlooks a clear blue sea so that the book guide equates this climbing spot to the Thailandia.

And it was really super, super, super: Our expectations were not disappointed: vertical walls, overhangs, tufas, 40 meters long. Even the nearby small fishing village of Jelsa, named "small Venice Venezia" is a fairytale place. 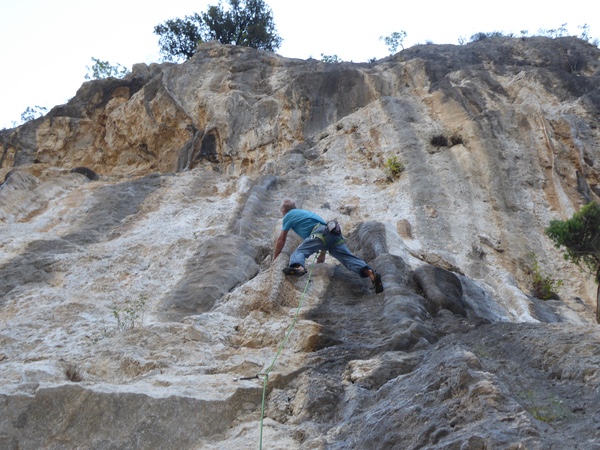 Back again on the solid ground, we went South, to Omis, a small touristic town a half hour from Split,  surrounded by majestic rock faces, high up to 400 meters, well visible from the harbor.

A real dream: sport climbing spots very well equipped, some of which at one minute from the parking spot, some other more secluded. And, in addition, high walls with a lot of sport multi-pitches, superbly equipped, and with limitless potential. (Ilinac, Sveti Jure, Stomorica...)

I think the climbing potential of Omis allows you to stay a month always going from one climbing spot to the next! In addition, Omis is very close to the harbor of Ancona, in Central Italy (and connected by a ferry boat).

I can confidently advise you to choose the Eastern coast of the Adriatico sea for a climbing trip... You won't be disappointed!

Happy climbing to all  by